The sister of IT & Test Environments Management is Release Management, and when it comes to delivering the capability at scale, that is at an organizational level, then we are talking “Enterprise Release Management” (ERM). ERM is the overarching governance framework that brings our different stakeholders, projects and teams together so we can effectively scope, approve, implement and ultimately deploy our changes effectively and in unison.

One could say, ERM bridges the gap between corporate strategy and DevOps. 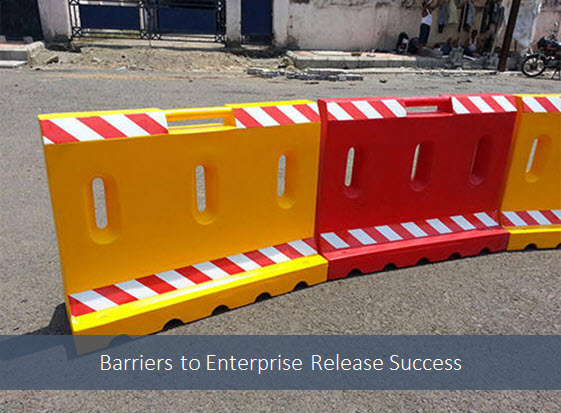 However, implementing an ERM framework isn’t necessarily done, as many companies still don’t do it, nor is it necessarily trivial. In fact, there are many barriers to successfully implementing ERM and ultimately ensuring effective and scalable delivery.

With that in mind, let's look at a few of the top barriers to ERM success.

One of the first steps to successfully implement ERM is to ensure that each stage in the end-to-end pipeline is complete and valid. It's critical that you don't overlook some very important processes in your pipeline like compliance or security assertions. Verifying these types of processes in the software development lifecycle (SDLC) is a barrier in ERM because it is complicated and requires a large number of revisions.

When a project starts, the workflow is simple. But as it grows, things get more and more complicated. You need more people, more dependencies, more checks, more systems, and more software changes. Then you need a standard process. Unified practices and processes help organizations ensure that every state is completed properly.

Integrating multiple projects and different departments is challenging. Every department has different goals and objectives, so it's not surprising that some departments have conflicts with each other. C-level executives put pressure on managers, who then put pressure on developers, to deliver on time. At the same time, developers pressure IT operators to release software changes faster, but IT ops are responsible for the system's stability and have to consider how every new change might put that stability at risk. This chain creates conflict constantly, sometimes forcing personnel involved in SDLC to break the rules and bypass some processes.

As you grow, it will become more difficult to ensure that every stage of the SDLC is completed. Help your teams understand why every piece of the ERM puzzle is important and be clear why some processes can't be left incomplete. A good set of checkmarks (or milestones and gates) will definitely make the verification process less painful. But for that, you need automation, which brings us to the next barrier.

The easiest way to start managing portfolio releases is with manual procedures. But having a spreadsheet where you control the priorities and release dates of projects doesn't scale well when you need to integrate more people and projects. Automate every task, process, and documentation you can. Don't think about it—just do it. Breaking the barrier of manually managing releases will let you focus on how to speed up software delivery.

Not everything can or should be automated—you still need someone to decide which releases are good to go and when. But getting rid of even some manual procedures is going to change the way you do things in your organization. The process will start by centralizing requests (or registration) for changes, which can come from several sources like marketing, management, and customers. Then you can start recording how these requests move through SDLC.

Leaving trails in the end-to-end process helps create status and compliance reports. You can easily leave trails when you integrate automatically—not only teams and projects, but also build, configuration, and deployment tools like Jenkins, Ansible, or Spinnaker. When you integrate tools like these into your ERM, you'll have information on how much time it takes for the company to deliver software change and complete critical tasks and you'll be able to prove to auditors that you're taking care of everything the company needs in order to comply with regulations.

Manually managing enterprise releases will give you headaches. People will end up spending too much time on things that don't necessarily add value to the customer. Break this barrier with automation because life is too short to keep doing boring things manually.

It's not easy to get the big picture of the release pipeline. There are too many required processes in the enterprise's journey to deliver software changes. And leaving a trail in each stage is the key to increasing visibility. A lack of visibility is a significant barrier to improving the software release process.

Knowing where you spend the majority of your time in the release pipeline lets you focus your work efficiently. Maybe you'll find out that you're spending too much time manually configuring applications. In that case, you might need to centralize and automate configuration management.

Or maybe you're spending too much time releasing software after it has been approved in a certain environment, like dev. That could be a sign that you're doing deployments differently in each environment. You might need to focus on preparing a good test environment framework.

But having more visibility isn't just about improving the process. If management wants updated information about how the project is going, they don't need to interrupt the team. Is the project going to be ready for the agreed release date? In which stage is it currently? Did the software pass all tests? Which team has the hot potato now? All sorts of information tell the story and status of a project, and it's all critical to the success of ERM. And you need to have that information up to date and in real time. Having enough visibility helps the team to communicate and coordinate better.

One of the main purposes of the ERM framework is to spend less time on releases. At least, that should be the expectation. The amount of time you spend on releases could become a barrier to succeeding in ERM.

ERM is a good framework to plan the date of a release, and that's good to know. But knowing that a release is going to happen in two months doesn't add a ton of value to customers or to management. By that time, it might be too late to release software changes, especially if you need to fix anything after the fact. When you have enough visibility, it becomes obvious where you can reduce the time a release takes.

The amount of time between releases can also increase if you fixed a bug that broke something else at the same time. You won't expect to have a high rate of deployment failures when you implement ERM.

Reasons may vary, but here's a list of things that I've seen affecting time between releases:

ERM should aim to break the pattern of long delays between releases by working to improve software architectures. There are practices like infrastructure as code, configuration management, self-provisioned environment, and others that ERM can orchestrate.

Not only does waiting for someone else to finish their part of the job to release a software change cause a lot of problems, but it could also become a barrier to ERM's success. You could end up accumulating too many changes, which, as we just discussed, increases the risk of failure and the time between releases. What should the team that's waiting do? Keep waiting? I don't think so—they usually start working on something else, which means they could be interrupted constantly to help with the pending release.

Let me give you an example of a common scenario. The developers have just finished their code changes to use a new column from a table in the database. Now they need to wait for the DBAs to add the new column, and after that, the code is ready for the release. Seems like a decent system, right? Wrong. That's just a sign that the architecture is highly dependent on the database.

Developers should be able to release software without having to worry that any dependency—like the database—has everything the application needs. What if database changes take a while to be ready for the release? No problem; the application code is using feature flags, and it's just a matter of releasing the code with the feature turned off.

What if the database changes have problems after the release? No problem; the application is resilient enough to expect problems in the database. Now that's a way of working that doesn't need complex solutions. Code apps so that they're ready for a release at all times.

If you miss the train on a release, you need to wait for the next one to come, and that should be OK. It's better to wait to release something until you are sure that it won't have a negative impact on the company's revenue. But as soon as it's ready, ship it.

As you can see, not all the barriers I described are related to a specific stage of deployment. Many teams play significant roles in the success of ERM, beginning when a project is planned in management offices to when it's being delivered to end users.

Automation; traceability; versioning control; decoupling architectures; releasing small, frequent changes; and other DevOps and Agile practices are going to help you successfully implement ERM. But also having the proper tools in place are key. Because if you only have a hammer, everything looks like a nail.

Barriers to a successful enterprise release management will always exist. But as long as you continue to find opportunities to improve, success is practically guaranteed.

Contribution by Christian. Christian Meléndez is a technologist that started as a software developer and has more recently become a cloud architect focused on implementing continuous delivery pipelines with applications in several flavors, including .NET, Node.js, and Java, often using Docker containers.